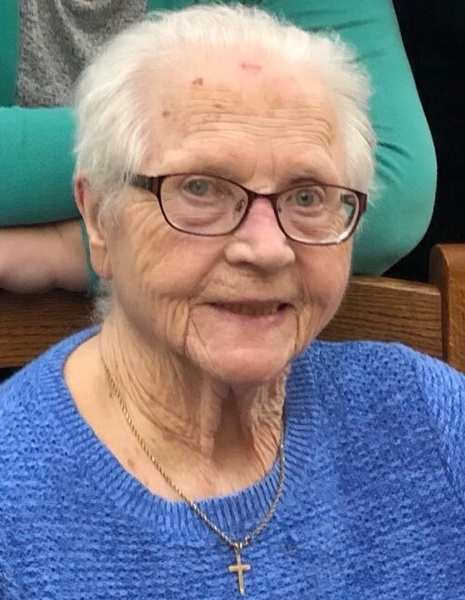 Thelma A. Eaton, a resident of Hillsboro, OH, and formerly of Bainbridge, OH, passed away on October 30, 2020, at Crestwood Ridge Nursing Home in Hillsboro. Thelma was born on Easter Sunday 1930 to Thelma Hall Eaton and John Roswell Eaton in Huntington, West Virginia, and grew up along the Ohio River in Proctorville, Ohio. She was so pleased to have celebrated her 90th birthday on Easter Sunday this year. Isn’t it funny when life comes full circle like that?

Thelma graduated from Ohio University and began her career in education, which would span 30 years in the Greenfield school system, at Buckskin Elementary and Rainsboro Elementary. On June 25, 1950, Thelma married Calvin Knisley at Rome Chapel in Proctorville, and they would later raise 5 children in the Nathaniel Massie House just outside of Bainbridge.

Thelma enjoyed a good game of Scrabble, her beloved dogs, playing cards and spending time out and about with friends. With Thelma, you always knew where you stood, for good or for bad. She didn’t mince words, didn’t suffer fools and never missed a chance to speak her mind. She loved the music of Willie Nelson and talked about him so much that her young granddaughter once thought that he actually was her grandma’s boyfriend.

She was predeceased by her parents, her former husband and father to her children, Calvin Knisley; a brother John Eaton; a son Charles Calvin Knisley; sons-in-law Robert McKell and Greg Haas; and special friend Lester Parker.

Thelma will be cremated and a graveside service is planned for a later date in Rome Cemetery, Proctorville, Ohio. In lieu of flowers, donations may be made to your local animal shelter in her name. Or better yet, adopt a pet who needs a home and give it the love that Thelma gave to all furry creatures.

The SMITH-MOORE-EBRIGHT FUNERAL HOME of Bainbridge is serving the family.

To order memorial trees or send flowers to the family in memory of Thelma A. Eaton, please visit our flower store.
Send a Sympathy Card