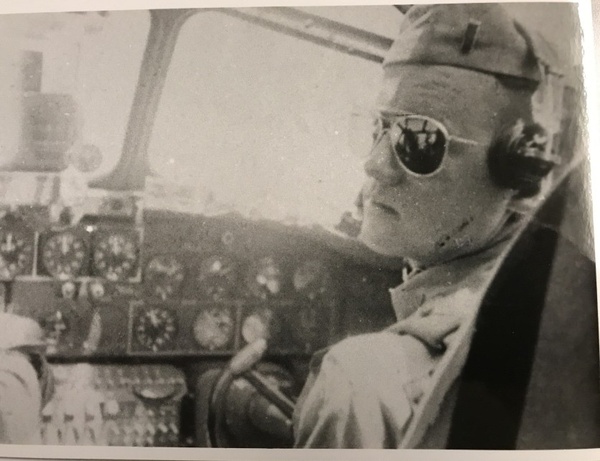 Solon L. Graham, 97, of Clarksburg, died at 11:41 a.m. on Sunday, July 21, 2019, at Adena Regional Medical Center, Chillicothe. He was born on May 30, 1922 near Clarksburg, the son of the late Hoyt Brown and Alice Loofbourrow Graham. On May 3, 1952 at the First United Methodist Church in Houston Texas, he married the former Verlla E. Mitchell, who survives.

In addition to his wife of 67 years, Solon is survived by three sons, David (Barbara Hastings) Graham of Clarksburg, Paul B. (Anne Scaperoth) Graham of Worthington, Mark W. Graham of Wooster, two grandchildren, Caleb G. (Sarah Shreve) Graham, Julia A. (Duke) Leisure, and five great-grandchildren, Ally, Hoyt, Mack, Case, and Emry. He was preceded in death by one granddaughter, Sarah E. Graham, one daughter-in-law, Pamela Graham, and one brother, Hoyt B. Graham Jr.

Solon was a 1940 graduate of Clarksburg High School, and he received a Bachelor of Business Administration degree from the University of Cincinnati. Solon enlisted in the United States Army Air Corps in 1942 and had reached 1st Lieutenant by the time he was discharged in 1946. He was a proud veteran of the 5th Air Force, 380th Bomb Group, and 528th Bomb Squadron. Solon served as Mayor of Clarksburg, President of Clarksburg Commercial Bank and partnered with his father to form Graham Insurance Agency. Solon was a member of the Clarksburg United Methodist Church, Clarksburg Volunteer Fire Department, a 75-year member of New Holland Masonic Lodge, the Scottish Rite- Valley of Columbus, the Joseph Ellsworth White Post 483 Frankfort American Legion, and served on the Clarksburg Field Day Committee for many years. Solon and Verlla were active members of the Ross County Historical Society and also supported many other historical societies.  Solon was a lifetime outdoorsman and was a supporter of many wildlife and conservation organizations and was a lifetime member of the National Rifle Association.

A graveside service for Solon will be held on Friday, July 26, 2019 at 11 a.m. in the Brown’s Chapel Cemetery, Clarksburg with Todd Thomas officiating. Following the service, the members of the Clarksburg Methodist Church will serve a meal for those who wish to visit with the family. Friends and family can visit with the Graham family in the EBRIGHT FUNERAL HOME, Frankfort, on Thursday from 4 to 8 p.m. In lieu of flowers, the family requests that memorial contributions be made to the charity of one’s choice

To order memorial trees or send flowers to the family in memory of Solon L. Graham, please visit our flower store.