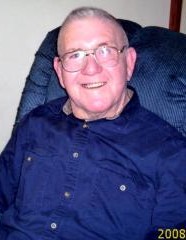 Russell P. VanDyke, 89, of Greenfield, died at 7:35 p.m. on Monday, September 4, 2017 at his home. He was born on July 10, 1928 in Piketon, the son of the late Walter and Nellie Mossbarger VanDyke. He was married to the former Isabel Hodge who preceded him in death in 1975. Surviving is his wife of forty one years, the former Maxine J. Helterbrand.

Russell retired from Armco Steel in Washington Court House following twenty years of service. He later worked fifteen years as a farmer and enjoyed woodworking and fishing in his spare time.

A funeral service will be held on at 1:00 p.m. on Thursday, September 7, 2017 in the ANDERSON-EBRIGHT FUNERAL HOME, Greenfield with Evangelist Jeff Satterfield officiating. Burial will follow in the Greenfield Cemetery. Friends may visit with Russell’s family from 11:00 a.m. until the time of the service on Thursday. Memorial contributions are suggested to Hospice of Fayette County, 222 Oakland Ave, Washington Court House, Ohio 43160.

To order memorial trees or send flowers to the family in memory of Russell P. VanDyke, please visit our flower store.
Send a Sympathy Card