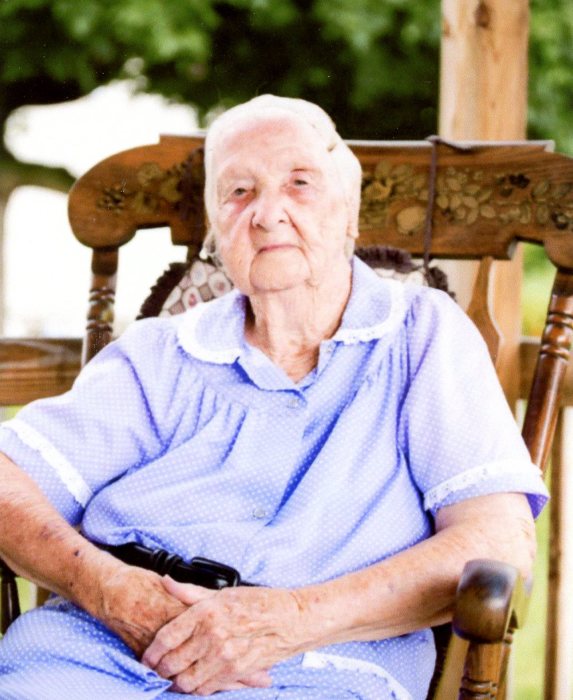 Nina Ellen McCallister, 103, of Chillicothe, died on Saturday evening, April 11, 2020 at 11:57 p.m. at Heartland of Chillicothe. She was born on Thursday, October 5, 1916 in Leesburg, Ohio, a daughter of the late William T. and Eliza Jane Edwards Palmer. Nina married John Kenneth McCallister on Thursday, November 29, 1939 and he preceded her in death on Wednesday, March 4, 1987.

Nina lived on Ragged Ridge Road over fifty-five years and for the last sixteen years she lived in Chillicothe. John and Nina were part of the original founders of the Pioneer School. Due to their persistence, many students continue to benefit from their dedication to individuals with special needs. They also sold five acres so that Valley View Nursing Home could build a nursing home where Nina worked for several years. In her younger days, she picked strawberries.

She was well known for her Angel Food cakes, her beautiful quilts that she handcrafted. She also made many crocheted items as well as many other handcrafted items. She will be greatly missed.

Due to the COVID – 19 Global Pandemic no calling hours will be held. Nina will be laid to rest beside her beloved husband and daughter in Greenlawn Cemetery, Frankfort. A public memorial service will held and announced at a later date for all her family and friends to take part in at the Frankfort United Methodist Church. Nina loved to see all the beautiful flowers in peolple’s garden and never really liked to see flowers cut. With that thought,in lieu of flowers, the family requests that memorial contributions be made in Nina’s memory to the Pioneer School, Attn: Kari Karshner, 167 W. Main Street, Chillicothe, OH 45601 or the Frankfort United Methodist Church, PO Box 266, Frankfort, OH 45628. Friends and relatives are encouraged to leave a personal remembrance of Nina on her online register at www.ebrightfuneralhome.com.

To order memorial trees or send flowers to the family in memory of Nina Ellen McCallister, please visit our flower store.
Send a Sympathy Card