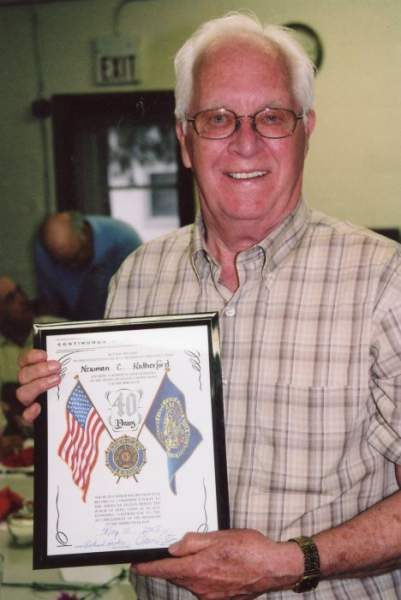 Newman C. Rutherford, 88, of Frankfort, died on Monday, March 27, 2017, at Valley View Alzheimer’s Care Center, Frankfort. He was born on August 1, 1928 in Jonesville VA, the son of the late Bernard and Rosa Morris Rutherford. On July 19, 1952, he married the former Gloria Crone, who survives.

Newman graduated from Jonesville High School. He served his country as a corporal in the United States Army, during the Korean War. From 1967 to 1979, he owned and operated the Frankfort IGA. Newman worked as a realtor for 33 years at Steven A. Madru Realtors, and retired in 2011. He was a member of the Christian Life Tabernacle Church, Chillicothe, the Ross County Board of Realtors, and a 49 year member of the Joseph Ellsworth White Post 483 Frankfort American Legion.

A funeral service will be held at 11 am on Friday, March 31 in the EBRIGHT FUNERAL HOME, Frankfort with Phillip Rutherford and Mark Smith officiating. Burial will follow in Greenlawn Cemetery, Frankfort, with military honors accorded by the Joseph Ellsworth White Post 483 Frankfort American Legion. Friends are invited to visit with the Rutherford family at the funeral home on Thursday from 5 to 8 pm. The family kindly asks that all flowers be omitted and that memorial contributions be made in Newman’s memory to Heartland Hospice, PO Box 400, Lucasville OH 45648, or the Valley View Care Center Patient Fund, 3363 Ragged Ridge Rd, Frankfort OH 45628.

To order memorial trees or send flowers to the family in memory of Newman C. Rutherford, please visit our flower store.