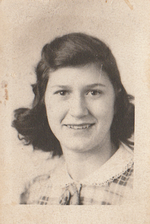 Mary E. Harris, 91, of Frankfort, died at 2:34am on Thursday, June 9, 2016, at Heartland of Chillicothe. She was born on March 29, 1925 in Bath County KY, the daughter of the late Benjamin and Millie McClanahan Corey. On January 8, 1955 she married Robert Harris who preceded her in death on October 30, 1995. On July 18, 1997 she married James R. Kearns who preceded her in death on May 3, 2010.
Surviving are two children, Andrea (Geoff) Bowers of Frankfort, Roy (Melissa) Corey of Chillicothe, step-daughter, Vaunchiska Tracy of Michigan, grandchildren, Nicholas Bowers, Shannon (Scott) Thompson, Abigail Bowers, Michael Corey, Courtney Corey, Eryc Corey, Evan Corey, step-grandson, E.J. Tracy, great-grandchildren, McKinleigh Bowers, Mikey Corey, Adaline Thompson, brother, Ambrose Corey of San Antonio TX, sister-in-law, Wilma Hatton of Frankfort, special great-nephew, Adam Corey, and many nieces and nephews. She was preceded in death by sisters, Dorothy Burruss, Catherine Corey, brothers, Clarence Hatton, RC Corey, Goble Corey, sisters-in-law, Ethel Corey, Mary Corey, and a special niece, Vada Corey.
In the 1960's Mary worked as a nanny and housekeeper for the Newman and Gloria Rutherford family, whom she loved dearly. In the 70's she was a home healthcare provider and had many residents who she cared for in her own home. Mary retired from the Marietta Nursing Home where she worked as a nursing assistant. She was a former member of the Roxabel Church of Christ in Christian Union. She took many family members into her home over the years and was a mother figure to many. The family wishes to express special thanks to two of her Heartland Hospice caregivers and nieces, Kay Austin, and Jackie Mitchell, for their love and attention over the last several months.
A funeral service will be held at 1pm on Tuesday, June 14, 2016 in the EBRIGHT FUNERAL HOME, Frankfort with Phillip Rutherford officiating. Burial will follow in Greenlawn Cemetery, Frankfort. Friends may call on the family at the funeral home on Monday from 6 to 8pm.

To order memorial trees or send flowers to the family in memory of Mary Ellen Harris, please visit our flower store.
Send a Sympathy Card