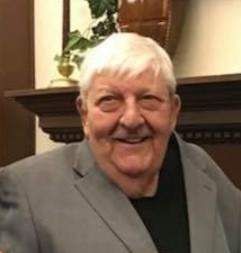 Glen was a 1956 graduate of St. Mary’s Memorial High School and in 1961 he received his Bachelor’s Degree in Social Services from Bowling Green State University. He retired from the Chillicothe Veterans Medical Center where he was a Social Worker for many years. He was a member of the Ohio High School Athletic Association where he was a known and respected official for many football, basketball, softball games, and track and field events. He also supported The Special Olympics as an official at many events.  Glen was a member of the P. Buckley Moss Society.

A funeral service will be held at 10 a.m. on Thursday, May 9, 2019 in the EBRIGHT FUNERAL HOME, Frankfort. In keeping with his wishes, cremation will follow the service. Friends may visit with the Schmidt family at the funeral home on Wednesday from 4 to 8 p.m. In lieu of flowers, the family requests that contributions be sent to establish a scholarship in his memory. Contributions can be sent to Stacie Smith, 7701 St Rt. 28, Frankfort, OH 45628.

To order memorial trees or send flowers to the family in memory of Glen G. Schmidt, please visit our flower store.