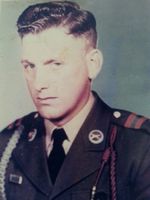 Frank L. Johnson, 81, of Frankfort, died at 7:47p.m. on Thursday, April 28, 2016, at Adena Regional Medical Center, Chillicothe. He was born on February 24, 1935 in Chillicothe, the son of the late Ora Foster and Florence Elizabeth Pettit Johnson. On January 13, 1963 he married the former Joan Drummond, who preceded him in death on July 19, 2015.
Surviving are one son; George Michael Johnson of Frankfort, two sisters, Joanna M. Bennett of Massieville, Sharon R. Bayless of Chillicothe, four brothers, Charles L. Johnson of Chillicothe, Edward K. Johnson of Frankfort, Terry A. Johnson of Nipgen, and Thomas Johnson of Frankfort, and family friend, Bill Newland of Frankfort. He was preceded in death by siblings, Elizabeth C. Miner, John J. Johnson, Alonzo E. Johnson, Ora B. Johnson, and Robert E. Johnson.
Frank retired from working at Budd Co., Frankfort. He had attended the Frankfort Presbyterian and Frankfort United Methodist Churches. Frank was a member of the United Auto Workers. He loved blue grass music and his 1929 Model A Ford Phaeton convertible.
A funeral service will be held at 11 a.m. in the EBRIGHT FUNERAL HOME, Frankfort on Tuesday, May 3, 2016 with Rev. Willard McCray officiating. Burial will follow in the Greenlawn Cemetery, Frankfort where military honors will be accorded. Friends may visit with Frank's family on Monday evening from 5 to 8 p.m. in the EBRIGHT FUNERAL HOME, Frankfort.

To order memorial trees or send flowers to the family in memory of Frank Leroy Johnson, please visit our flower store.
Send a Sympathy Card