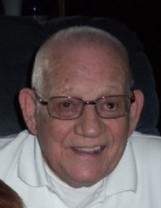 Donald F. Malott, 85, of Greenfield, died on Sunday evening, September 9, 2018 at the Edgewood Manor of Greenfield. He was born on June 3, 1933 in Ross County, the son of the late Lawrence and Garnet Kinzer Malott. On June 18, 1955 he married the former Mary Lou Penwell, and she survives.

Don retired from Ferno-Washington in Wilmington following thirty years of service. Following his retirement, he went to work at Greenfield Research. Don was an avid bowler for many years.

A funeral service will be held at 11 am on Friday, September 14, 2018, in the ANDERSON-EBRIGHT FUNERAL HOME, Greenfield. Burial will follow in Greenfield Cemetery. Friends and family can visit with the Malott family at the funeral home on Thursday from 5 p.m. to 7 p.m.

To order memorial trees or send flowers to the family in memory of Donald F. Malott, please visit our flower store.