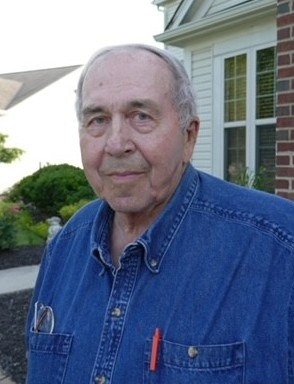 As a child, Charles milked cows each day before school and worked on the family farm.  After his graduation from Frankfort High School, Charles enlisted in the U.S. Army and served as a radio technician while stationed in Ankara, Turkey.  He took advantage of travel opportunities in post-war Europe and sometimes reminisced about visiting Istanbul, Geneva, Munich, Rome, Paris, Athens, Casablanca, and Tripoli. He often remarked that he got more good from the Army than it did from him. On returning home, Charles farmed and later worked for Standard Oil and Ohio Eastern Express.

Charles will be greatly missed by his family, his dog Lizzie and many good friends including those in the Legion morning coffee group, which he always  enjoyed.

Charles was a 60-yr member of the Frankfort Masonic Lodge 309, where he was a Past Master; Frankfort American Legion Post 483; and Chillicothe Order of the Eastern Star.

At Charles’ request, Pastor Todd Thomas presided over the service and a graveside Masonic service was held. Donations in Charles’ memory may be made to the Ross County Humane Society Animal Shelter, 2308A Lick Run Road, Chillicothe OH 45601.

To order memorial trees or send flowers to the family in memory of Charles Robert Junk, please visit our flower store.