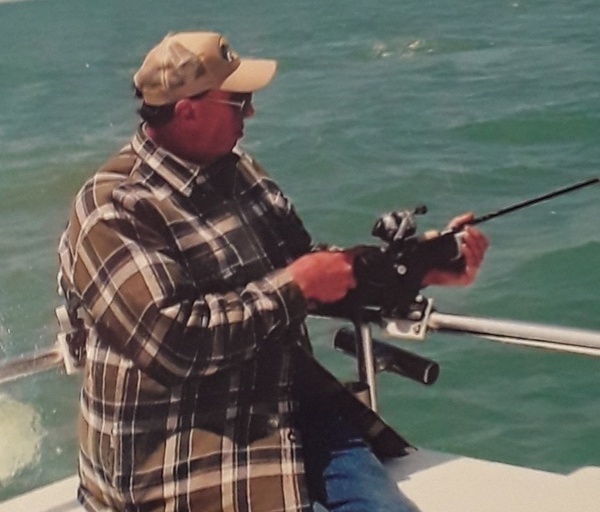 A Kentucky native, Carlos Ray Stapleton starred in countless family vacations, fishing trips, boating adventures on Paint Creek Lake, hunting expeditions but was closely identified with the character of “Pap”.  His pleasant personality was contagious to everyone he met.  Having fun with his family was his mission in life.  Carlos was reunited with his son Bryan on July 20th at 10:07 p.m. surrounded by his family.
Carlos was a proud graduate of Leesburg Fairfield Schools.
Carlos met the love of his life, Evelyn, in the summer of 1968 and was united in marriage on July 10th, 1971.  Earlier this year, Carlos and Evelyn celebrated 51 years of wedded bliss.
Together, Carlos and Evelyn, had two beautiful children, Bryan Allen who was their first born on December 5, 1974.  Carla Dawn, their daughter, who was born on October 10, 1978.  The simplest pleasures of life brought joy and blessedness to this family of four.
Known as the carpet layer in the big red van, Carlos had his own carpet business and laid just about all the carpet in Highland County.
Carlos was the son of Caleb and Marie (Vickers) Stapleton and came into this world on June 1, 1949.  He was predeceased by his parents.  He is survived by his devoted wife, Evelyn (Satterfield) and his daughter Carla (Mark) Hugenberg of Batavia, Ohio.  Also, he was the most loving brother to Jewel (Bob) Deaton and Jim (Pam) Stapleton.
Also surviving this wonderful man: Mark Hugenberg (son-in-law), brothers-in-law and sisters-in-law, Mike and Sylvia Satterfield of Centerville, Ohio, Steve and Patty Satterfield of Louisville, Kentucky, and Jeff and Pam Satterfield of Villar Ridge, Missouri.   Also, surviving, Jamie Stapleton of Greenfield, Ohio who is the mother of Bryan’s children.  Additionally survived by Lindsey Young of Blanchester, Ohio who was the flame and fiancé of Bryan.  He has many nieces and nephews remaining.
He was preceded in death by sisters Virgie Merritt, Cleda Merritt, Dorothy Cross, and brother Orville (Jaybird) Stapleton.
A grandmaster and leader, he was a grandpa who cared and loved his grandchildren while supporting them in all their activities.  Madison Layne of Cincinnati, Ohio was his first-born grandchild whom he always adored.  Drake Mason of Greenfield, Ohio arrived four years later and was his fishing, hunting, and basketball buddy.  Next, is Nathanael of Batavia, Ohio who was his green thumb gardener.  Two years later, he was blessed with his second granddaughter Grace Elizabeth of Batavia, Ohio, the apple of his eye. His fifth and final grandson is Nicholas Thomas of Batavia, Ohio whom he loved and prized as his “Little Bryan”.
Even though cancer took him away from this world, his loving heart will be joyful and like a beacon of light to all who knew him.
He was the strongest man in the world as Madison would say.  According to Drake, Pap was the best squirrel hunter and boater in the land.  Nathanael would tell you that he was the best farmer in all the world.  Grace says that her “Pap” is the bestest Pap in the galaxy.  But Nicholas would say that Pap Stapleton was the Pap who knew how to do EVERYTHING.
Carlos saw God in a rippling river, a warm sandy beach, a yellow daisy, a cow grazing in a field, and in the eyes of his children and grandchildren.
How blessed the Stapleton family has been to have had Carlos Ray Stapleton as their leader, dad, and Pappy.  Carlos was truly a blessing from God.  Now he sits in Heaven with his son, Bryan, each and every day.  His spirit watches over his family and never goes away.
Services will be handled by Anderson-Ebright Funeral Home of Greenfield, Ohio.  Visitation for family and friends will be Monday, July 25 from 5-8 p.m. at the funeral home.  Funeral services will be Tuesday, July 26 at 11:00 a.m. followed by burial in Gilboa Cemetery near New Petersburg, Ohio.  Memorial contributions may be sent to Heartland Hospice of Portsmouth, Ohio.  Also, it was Carlos’ wish for donations to go to Saint Jude Center for children with cancer.

To order memorial trees or send flowers to the family in memory of Carlos Stapleton, please visit our flower store.