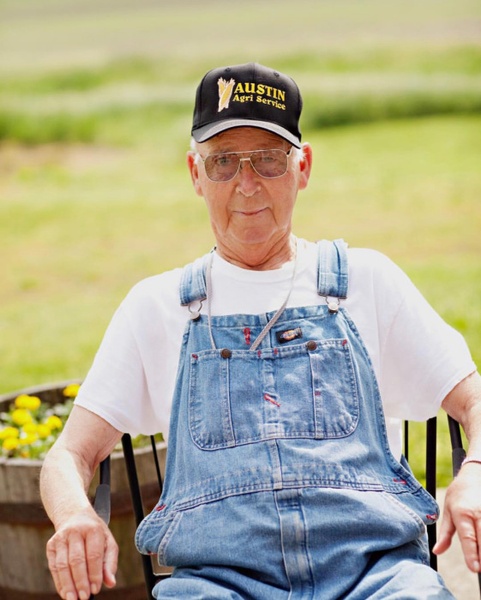 Calvin Wright Peterson, 88, of Austin (Frankfort), passed away at his residence on Sunday, September 15, 2019, one day past his 88th birthday. He was born on Monday, September 14, 1931 in Frankfort, the son of the late Albert Finch and Marjorie Wright Peterson.  On July 29, 1951 he married Ruth Ann Riehle and she preceded him in death on September 6, 2010.

Calvin, who was known as the Mayor of Austin, Ohio was a 1949 graduate of Frankfort High School. He worked on the Peterson farm with his family. Calvin was a bus driver for the Dayton and Southeastern Bus Line and retired from Murphy Motor Freight where he had driven over one million miles without a preventable accident. Following his retirement from Murphy, he worked for the Chillicothe Gazette where he traveled collecting the money from vendors of the paper.

Calvin was a member of the Sons of the American Revolution, the Ross County Farm Bureau and the Frankfort Historical Society. He and Bob Junk founded the Austin Historical Society many years ago. He was an avid Dale (3) and Dale Jr. (88) NASCAR fan.

The family would like to send a very special Thank You to all the staff of Ohio Hospice – Fayette County for the loving care that was extended to Calvin.

A funeral service will be held on Thursday, September 19, 2019 at 10 a.m. in the EBRIGHT FUNERAL HOME, Frankfort with his friend, Rev. Jack Norman officiating. Following the service, Calvin will be laid to rest beside his wife in Greenlawn Cemetery, Frankfort. Family and friends can visit with the Peterson family on Wednesday from 5 p.m. to 8 p.m. at the funeral home. Memorial contributions are suggested to Brookside Seniors, Brookside Church, 2215 Egypt Pk., Chillicothe, OH 45601.

To order memorial trees or send flowers to the family in memory of Calvin Wright Peterson, please visit our flower store.