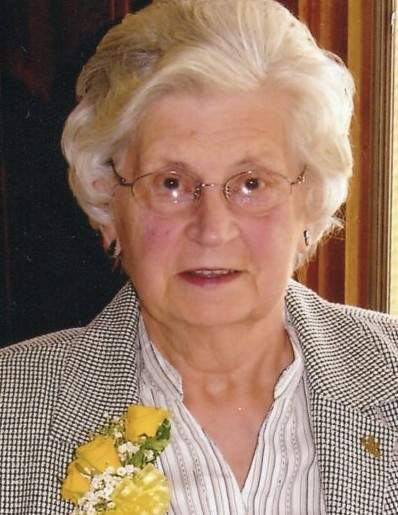 Bertha was a member of and held various offices within the Dry Run United Methodist Church and the United Methodist Women since 1940. She was a past member of the Farm Bureau, Couples Club and Grange organizations. She was employed by the Adena School System for seventeen years. Bertha was totally devoted to and cared greatly for her family and friends.

A funeral service wiIl be at 10 a.m. on Wednesday, October 12, 2016 at the Dry Run United Methodist Church with Pastor Jerry Caddell and Rev. Michael Wright officiating. Burial will follow in Greenlawn Cemetery, Frankfort. Friends can visit with Bertha’s family on Tuesday  from 4 to 8 p.m. at the EBRIGHT FUNERAL HOME, Frankfort and a half hour prior to the service at the church on Wednesday. For those who wish, memorial contributions are suggested to the Dry Run Church, c/o Kim Rittenhouse, 10754 Westfall Rd., Frankfort, OH 45628 Those wishing to sign Bertha’s online register book may do so at www.ebrightfuneralhome.com.

To order memorial trees or send flowers to the family in memory of Bertha F. Garrison, please visit our flower store.